The Infrared Inspections on Electric Panels without Removing Covers Cannot be Completed Correctly – And here’s why.

There has existed in the past a misunderstanding that Infra-red Thermography could be accomplished without the benefit of removing panel and/or front covers on electrical apparatus. This would be wonderful from the standpoint of logistics, manpower, and labour hours.

The basis behind this web page is to determine if the scans can be successful by leaving the various covers in place. Before and after images were collected on several different location cabinets to determine the results.

Infared cameras used in the performing of thermal image surveying in any application are not X-Ray devices that allow for “seeing” through solid surfaces and materials. We know that when temperature variations are visible to the camera on these types of scenarios, the actual problem area and source of the thermal energy is going to be exponentially higher at the source, and the camera is “seeing” only a portion of the total.

Our first two examples explore the possibility of doing proper IR thermography in distribution board without removing the front cover to view the actual buss and load side terminals.

As you can see in Figure #1 prior to the removal of the front cover, there is an obvious load on the suspect breaker 4th down on the right.

The observed temperature is around 30 degrees C and within the manufacturer’s operating specifications. The temperature on the front cover is closer to 23 degrees C and not an apparent concern, right? One may simply deduce this is only load created energy on the breaker and bypass it during an inspection.

Once the cover is removed, a far worse issue is revealed in Figure #2. 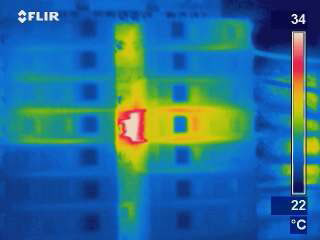 In today’s world, the mentality and “buzzword” is lean manufacturing and reduced maintenance costs. Competition throughout the industry demands that we must all do more with fewer resources. This should not mean that in the interest of cost savings, short-cuts should be taken that can cause misjudgements which may contribute to downtime or equipment failure.

In the examples above, there are no doubts that problems that existed on line side connections. Analysis, including voltage drop measurements, confirmed that due to resistance issues, thermal energy was being created and radiated. Although there was conduction noted on the breaker cases, it most likely would not be considered to be abnormal, deficient, or in failure stage.

The Square D I-Line panel is an excellent illustration of the types of critical temperature errors that may be realized while performing services if we do not safely take that necessary step of removing ALL covers to have the line of sight to the target. For one to identify and quantify an anomaly on the exterior of an electrical enclosure, the severity of the problem and the amount of thermal radiation needed internally to be visible to the camera would be exponentially higher and near catastrophic failure. In this case, one would not want to attempt to open the enclosure while it was energized, and a shutdown would be the prudent course of action to correct the deficiency.

To be accurate in our analysis and identification of anomalies directly relates to our credibility with our customers. For this to be accomplished, we must follow established procedures each and every time we apply the technology. This becomes a function of the application and discipline we are practicing, along with the fundamental knowledge of the equipment we are performing services on.

It is an elementary requirement and an industry-accepted standard that to effectively perform infrared services on energized electrical equipment, it must be under normal load and operating conditions. Normal, admittedly, is defined as having the covers and dead fronts installed. However, from a maintenance and service standpoint, accuracy and precision must be the focus of our objectives, and this can only be achieved by the safe removal, each and every time, of both panel and any internal shields. This is imperative to ensure that our preventive maintenance programs do not overlook potentially critical issues and cause customers to experience unscheduled outages and equipment damage.

This information was taken from here as it is an excellent depiction of how thermal imaging must be conducted under normal load with the covers removed.

We are giving away...
• Energy saving light bulbs with all Distribution Board Upgrades.
• Loft Insulation, we will increase the insulation in your loft by a minimum 100mm thick. (usually 200mm)
• Smoke & Heat Detectors, We will install mains voltage interlinked Smoke & Heat Detectors in your home for FREE.
See Our Offer Terms & Conditions

"I highly recommend Paul and his team. His work has been of the highest quality and Paul has been extremely helpful in all aspects of the total rewiring and refurbishment of our grade two listed property which is over 300 years old and has over 9 bedrooms. Paul has been involved in .....
Mr Lewis
"Paul rewired my new house 19 months ago and is back to do an extension/remodel for me. Having got quotes from and worked with a wealth of different trades over the last few months, I can only say what a relief it was to have Paul back on site......
Mr James Howard-Jones
This website uses cookies to improve your experience. We'll assume you're ok with this, but you can opt-out if you wish.Accept Read More
Privacy & Cookies Policy

Any cookies that may not be particularly necessary for the website to function and is used specifically to collect user personal data via analytics, ads, other embedded contents are termed as non-necessary cookies. It is mandatory to procure user consent prior to running these cookies on your website.